History: Inner City Press / Community on the Move (ICP) is a non-profit community, consumers’ and human rights organization headquartered in the South Bronx of New York City, engaged in cutting-edge advocacy , reporting and organizing in the fields of community reinvestment, fair access to credit, insurance and telecommunications, environmental justice, and government and corporate human rights accountability.

Click here for some recent news about our work.

The more recently formed Inner City Public Interest Law Center engages in litigation and administrative advocacy around these issues, including collaborating with or providing legal representation to other grassroots groups. Click here for some recent news about our work. Click here for a brief description of some of our current campaigns -- some of the most recent of which are summarized on our Bank Beat page, and in our CRA Reporter (both are updated at least weekly). In 2005, ICP is engaged among other things in a nationwide campaign regarding banks' funding of high-cost fringe financiers. See, e.g., the 2004 announcement of SunTrust, in response to ICP's comments, that it will cease such lending.

In terms of international human rights, in 2006, ICP's Fair Finance Watch is pursuing justice on PNC and Riggs Bank, its money laundering for Augusto Pinochet and the dictotor of Equatorial Guinea. Also, Deutsche Bank's dealings with Turkmenistan are also being spotlighted. For more information, or to get involved, contact us.

This web site provides information, resources and reporting on these and other issues, including creative writing and investigative journalism, as a successor to ICP’s initial newspaper publication.  ICP has published a (double) book on the topic of predatory lending.  The Pittsburgh City Paper of Dec. 11, 2003, says that the "novel Predatory Bender: A Story of Subprime Finance may, in fact, be the first great American lending malfeasance novel." Click here for that review; click here for sample chapters, an interactive map, and ordering information.  Click here for a more colloquial presentation, in question and answer format.

ICP was founded in 1987 in the South Bronx, by families who were in need of housing, and undertook repairing abandoned buildings to make that housing. From the beginning, the group published a bi-monthly newspaper, Inner City Press / La Prensa del Pueblo.

As more and more people joined the ICP Homesteaders Association, the group took on other issues of concern in the South Bronx and other low-income neighborhoods: the difficulty of access to credit and financial services, disproportionate exposure to toxic and hazardous waste, lack of accountability from government agencies and elected officials, police brutality -- in short, injustice and exclusion.

One of ICP’s main focuses is enforcement of the Community Reinvestment Act (CRA), a federal law enacted in 1977 to require banks to fairly serve low- and moderate-income neighborhoods. The CRA is enforced by challenging banks’ merger and expansion applications, documenting the banks’ failure to serve poor communities.

In 1992, ICP challenged an acquisition proposal by The Bank of New York, based on that bank’s exclusion of the South Bronx and Harlem from its service area. ICP prevailed: the bank expanded its service territory to include the Bronx and Harlem, and, in 1993, committed $5 million in loans to the areas.

In 1994, after having discussed this precedent with other NYC banks which similarly excluded the Bronx, but having seen few changes, ICP challenged the expansion applications of five more banks. To resolve these challenges, two banks (Dime Savings and NatWest, now Fleet) opened new bank branches in the South Bronx, for first new branches here in twenty years. Two other banks (Marine Midland and Republic) opened new loan production offices in the Bronx; the other bank (First Fidelity, now First Union) committed $15 million in new lending to the South Bronx. These successes were widely reported; ICP’s work was profiled on ABC News’ Nightline program on April 10, 1995 (Transcript # 3621).

As word of ICP’s successful enforcement of the CRA spread, other community groups, and consumers, began to contact ICP for advice and assistance. ICP began to collaborate with groups in other states on CRA challenges: for example, to Bank One, NationsBank (now Bank of America), First Union, and others. To formalize this work, and ICP’s emerging environmental and telecommunications advocacy (which has included successful challenges to media mergers), in 1998 we founded the Inner City Public Interest Law Center (ICPILC), with ICP’s initial executive director becoming the general counsel of the ICPILC.

In 1999, ICP won several more important CRA precedents.  One involved the investment bank Lehman Brothers, which sought to acquire the failing Delaware Savings Bank with scarcely a CRA plan in place, and while being active in underwriting the mortgage-backed securities of various subprime lenders, including Delta Funding, which was sued by NYS authorities for predatory lending.  After ICP's and DCRAC's comments, the OTS encouraged Lehman Brothers to pledge $2.2 billion in low and moderate income lending, and to identify and avoid predatory lending practices, including in the loan pools Lehman does the underwriting for.  Another joint ICP / DCRAC protest ended with GMAC pledging $6 billion in low and moderate income lending.  ICP advocates for the appropriate application of CRA to Internet banks -- see ICP's Hot Issues page for more.

Now in 2005, ICP is engaged in a nationwide campaign regarding banks' funding of high-cost fringe financiers. See, e.g., the 2004 announcement of SunTrust, in response to ICP's comments, that it will cease such lending. ICP is also focused on JPM Chase, Wachovia, Bank of America,. Wells Fargo and others -- including,   it goes without saying, Citigroup and HSBC.  In 2003,   ICP/FFW revived its AIG Watch -- regarding Japan.  In late April 2003, ICP began a GE Watch, of GE Capital, GE Consumer Finance and General Electric.  From November 2002 onwards, ICP has campagined against the combination of HSBC and Household International.  From June 3, 2002, onwards, ICP filed evidence against Citigroup's application to acquire Golden State Bancorp.  On October 15, 2001, ICP filed comments on Washington Mutual's application to acquire Dime Bancorp and Dime Savings Bank.  Following September 11, 2001, we began a Finance Watch on issues of   money laundering, and bank accountability generally.  ICP on July 24, 2000 began an ongoing Citigroup Accountability Project.  Beginning November 6, 2000, see our J.P. Morgan Chase Watch.   Other ongoing pages are our  Wells Fargo Watch page, our U.S. Bancorp Watch page, our Fleet Watch page, our Wachovia Watch page, and, more globally (that is, beyond the U.S.), our Deutsche Bank Watch page, our HSBC Watch page, our Mizuho Watch page, our Royal Bank of Canada Watch, etc....

In terms of international human rights, in 2005, ICP and FFW are pursuing justice on PNC and Riggs Bank, its money laundering for Augusto Pinochet and the dictotor of Equatorial Guinea. Also, Deutsche Bank's dealings with Turkmenistan are also being spotlighted.

This website has sub-pages on a variety of issues: CRA, insurance redlining, environmental justice, telecommunications advocacy, arts and culture. We welcome your suggestions or comments on this website, or on our work. Click here for five different ways to contact us.

Thank you for your interest. 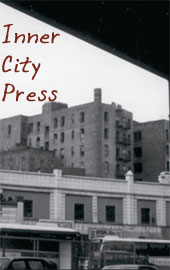 Reporting from the United Nations